I recently upgraded from Ubuntu 13.10 to 14.04. Everything is fine, except the brightness of my laptop screen. When I change the brightness the screen simply does not respond. I figured this was a graphics driver issue, but having updated and reinstalled all nvidia drivers the problem persists. It’s rather nasty, as the screen is now permanently set to the darkest setting, making it almost impossible to see anything.

I also tried the solution proposed here: Ubuntu 14.04 – brightness problem in HP hybrid laptop
but this, sadly, didn’t help either.

I have a HP Elitebook 8560w, with an nvidia Quadro 1000M and am running the latest nvidia-current drivers available in the apt-get repo’s

For the record, I tried experimental nvidia drivers, which consequently crashed my entire OS. Therefore, I reinstalled 14.04 cleanly, yet this problem still persists

It’s probably a bug with drivers > 304 which has been around for a while:

According to these bug reports the only solution is to roll back to a driver version <= 304.

Not a solution but rather a workaround.

There should be a file
/sys/class/backlight/acpi_video0/brightness

In this file you have a particular decimal value which corresponds to brightness.

Now, when I use openbox desktop environment, my fn key doesn’t work, which is why i use the following script to set it:

Now, you may want to check the /sys/class/backlight folder just to make sure that you have acpi_video0 file there. It may be named differently for your system

I’ve wrote another script which uses zenity (graphical front end for scripts) and xrandr, with a desktop shortcut.

Place this file in /usr/bin folder, call it backlightscript

I’ve found that optimal brightness is between 0.2 and 0.9. If you go bellow 0.2 or 1 screen gets either too dark or too bright. In this script, the user double-clicks on the backlight.desktop shortcut, which calls graphical pop-up with a scale, where user selects necessary brightness from 0 to 7. That value is incremented by 2 ( so max is 7+2=9 and min is 0+2=2 ) and stored in brightness variable. That variable then becomes the value after decimal point for xrandr --output LVDS --brightness 0.$brightness.

The if – then block is used to test whether the user actually selected something. Without it, xrandr will set brightness to 0, in which case you won’t see anything on your screen, even tty1, and will have to either reboot or do Alt+SYSRQ+R+E+I+S+U+B

How it should look 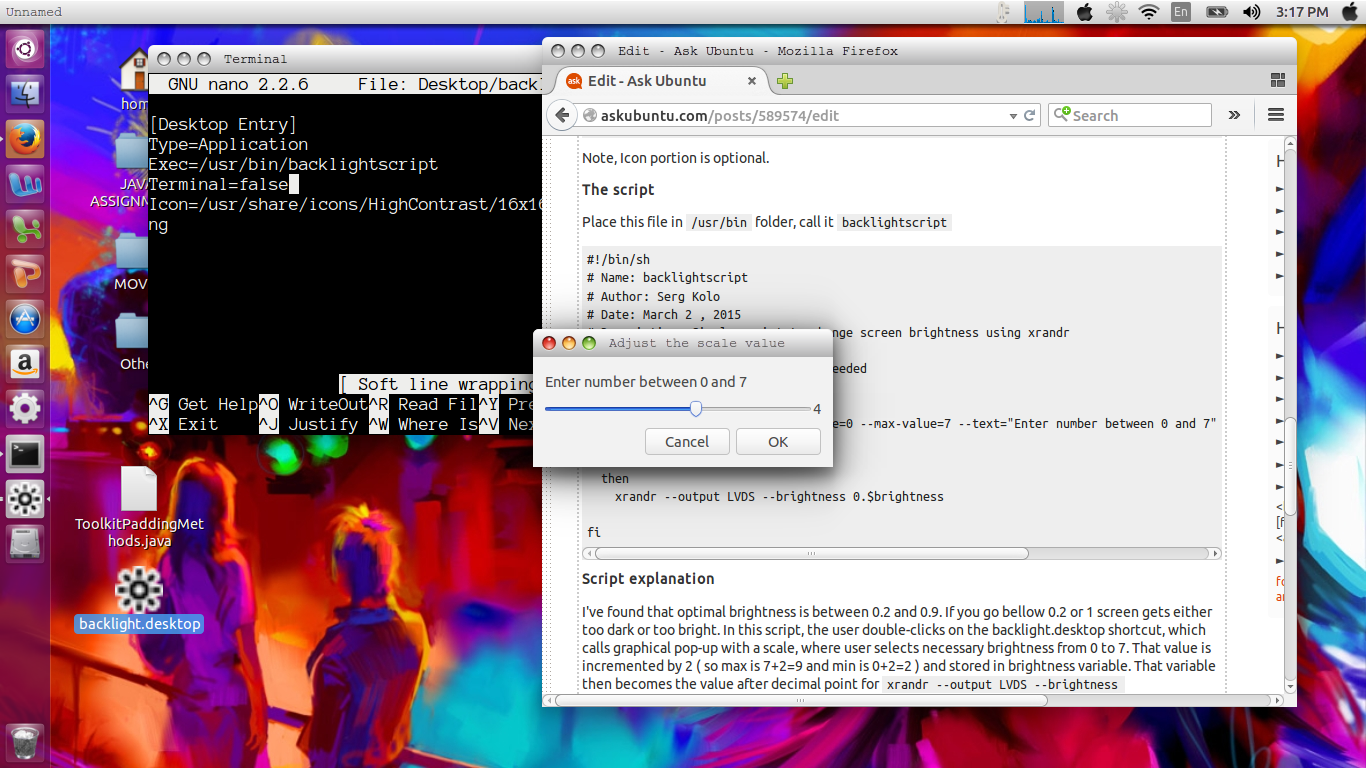 I got it to work on a Lenovo W510 with a Quadro FX 880M by creating /usr/share/X11/xorg.conf.d/20-nvidia.conf with the following contents:

At last it is fixed with latest driver which was released by Nvidia with release date: 2017.5.4 and its version number: 375.66

Fixed a bug that caused backlight brightness to not be controllable on some notebooks with DisplayPort internal panels.

Is it safe to format msftres, msftdata and hidden partitions?

Run dockerd as a background on WSL Ubuntu