I recently started using the SSDT schema and data and comparison tools. For years I was using Red Gate’s SQL Compare and SQL Data Compare, but I figured the VS tools are probably enough and figured I would see if I could stand to live with them. They’ve been working fine for the past couple of months, but today I’m getting a bizarre result when comparing the schema between a local database and an Azure SQL database that I want to deploy changes to for a web app. The schema comparison has marked several columns as different and indicating that they will be deleted. There is in fact, one new column being added. However, nothing has changed in any of the other columns. I ticked the "Ignore Column Order" box so that column order is not considered. I also unchecked users and roles because they are different between my local dev and the staging environment and I don’t want to consider those differences.

Is the coloring just wrong? Will it actually delete the PermitLimit column and recreate it even though nothing has changed?? Is there some other setting I need to set so that these identical columns are not being highlighted as having differences?

The schema compare UI gets a little mixed up in the face of multiple changes like this sometimes. You should use the "Generate Script" button to see what actual changes will be made at runtime. Generally, you want your test run to be as similar as possible to how you’ll really deploy the changes.

In your case, the combination that’s causing confusion is:

I can repeat your problem by creating this table and deploying it locally:

Now, I can alter the source file to reorder the int and string columns, and the schema compare tool will show that change by default:

As you mentioned, I can enable the "Ignore column order" setting using the little gear icon, and schema compare then shows no changes. 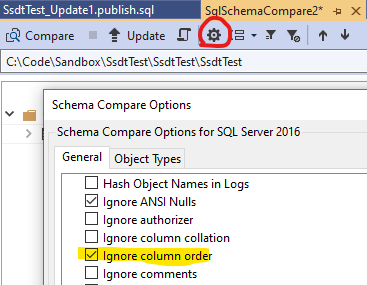 If I then go and give my default constraint a name:

The schema compare shows the column order change and the constraint name change, even though I still have "ignore column order" checked:

The more reliable way to see what changes will actually be made is to click the "generate script" button in the toolbar:

The script produced does not drop and re-add any columns:

how to get the difference between 2 tables in 2 different schema's in Oracle?

Count hours when a specific value is higher than a treshold