I have a ASP.NET Core 5 (.NET 5) project that deals with GPS devices and generates roughly 6-8GB of data per day. For the past several months I’ve been working on improving the reading and writing of this data. For reading I’ve completely, I think, removed EF Core and replaced it with Dapper and stored procedures. For writing I’m still using EF Core and I’ve been optimizing the data types for the columns, recreating the indexes, and overall rebuilding the database (14K line upgrade script so far). I’ve managed to reduce the size by 71% from all of that and the growth should be substantially slower, maybe 0.5-1GB per day.

All of this is great, but there are some large accounts that have thousands of devices in them that generate thousands more notifications per day. I know that the indexes are as good as they’re gonna get at this point and most of the hot queries are doing seeking about 95% of the time, but we’re running into an issue that if we open say six of the largest accounts at once, about four of them will load almost immediately, and the other two will time out. Refreshing the two that failed always time out.

If I restart SQL Server, and reload the two that failed, they’ll instantly load, but now two of the previous four will fail. It basically seems to be that whichever ones load first will always load, the remaining will fail. Obviously when restarting SQL Server the memory is flushed until it starts building up again. So it’s some sort of a memory/caching issue. I’ve noticed that once the memory is filled up and it tries to read from disk, it’s reading at about 20MB/s when the drive can do 2.5-3GB/s. I left one of the failing queries to run then stopped it after 10 min of waiting, restarted SQL Server, and retried it and it completed in one second.

What can I/should I do to resolve the time outs/regressions when the memory ends up filling up?

A little bit more information about the live server. It is a t3a.xlarge on AWS and I’m entertaining the idea of bumping it to t3a.2xlarge depending on the costs. It reboots nightly. It’s not a perfect configuration because I also have MySQL (disabled) on it so that we could import the original database from the previous developer into SQL Server. It needs to be rebuilt, that I know, but I don’t have the time to do that right now or any time soon.

@AMtwo, I did have max memory at the default and I changed it to 28GB out of the 32GB on my system. LPIM was off so I turned it on.

@J.D., For the four largest accounts the row counts are: A 5,507, B 1401, C 318, D 220. Curiously, after the latest rebuild overnight I went through and opened all accounts in the ASP.NET application of the type those are (about 211), and all of them opened except for A. A is the biggest account and is the one that is most accessed unfortunately. As of right now when accessing it from ASP.NET Core, it times out and does a large read spike, but when I run the exact same SP using SSMS it loads fine in about 2 seconds with a much smaller read spike.

See the attached screenshots from task manager. After all other accounts were opened once and I try this large account in ASP.NET Core it just times out and does large 100MB+ reads for a long time, while in SSMS it does much smaller 100MB+ reads for a much shorter time and completes in 2 seconds. After restarting SQL Server, memory is dumped, and opening this account in ASP.NET Core results in a 2-3 second processing with barely 1MB in disk reads. Memory consumption also barely registers.

I’m shrinking the database because the live database is spiraling out of control and so are the associated costs. Currently between the main data database and the Serilog database we’re using 929GB with a growth of 6-8GB per day. The rebuilt databases are now at 268GB with an expected growth of 0.5-1GB per day or less. So, to be blunt, I don’t particularly care about the red flags you speak of about shrinking the database. I need to be able to manage and control the growth of the database, and the costs associated with it. I can’t just keep bumping up the volume size or eventually changing the instance size and adding more expensive resources just to be able to run when a rebuild and shrink will do a much better job. For what it’s worth, when I run the database rebuild script, the apps will also be getting updated and will be completely shut down and incoming data will be redirected to S3 and imported back when they come back online, there will be no reading or writing to the database from the apps at that time, so I can do the rebuild and shrink.

Eventually we’ll have to implement archiving to start dumping old data out of the database to keep its size manageable, but that’s work for far into the future.

The execution plan is attached. The only difference between all accounts is the id being passed into the SP.

@David Browne, I will look into that.

@RBarryYoung, Open or load I’m using interchangeably for when I browse the ASP.NET Core app and go to an account’s page. I think the execution plan screenshot covers what you’re looking for? 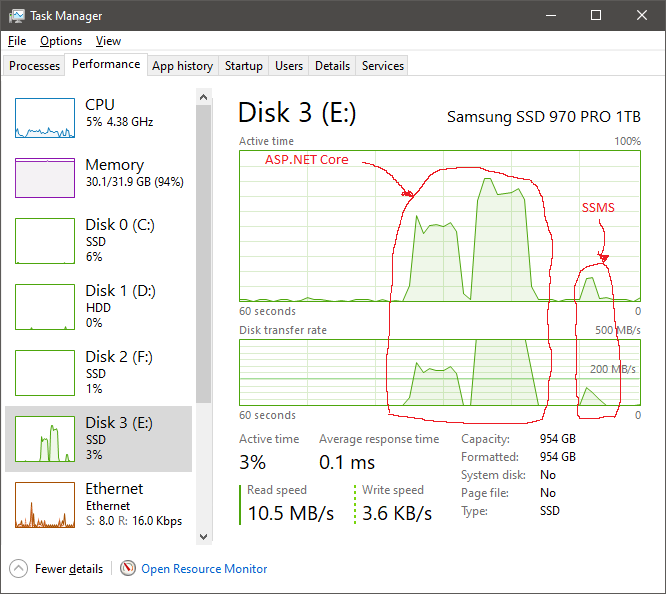 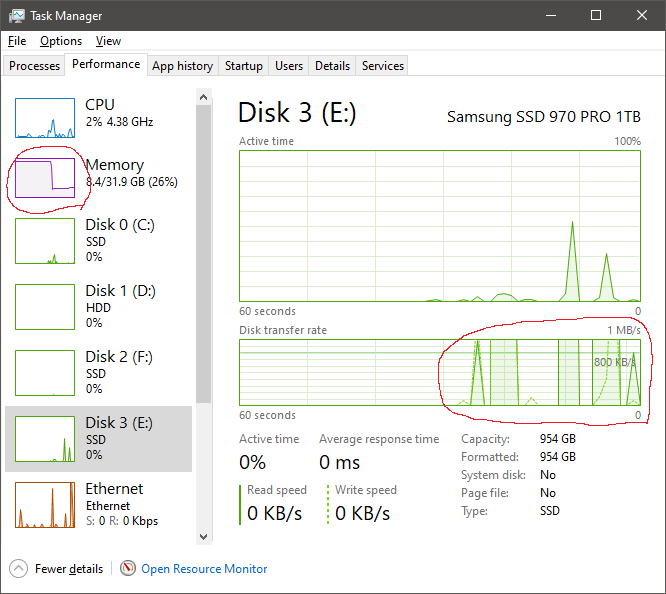 Execution plan for the SP.

After several days of reading up on SQL Server’s internals, I finally solved my issue. Here’s how:

I started out with sp-Blitz as @FrancescoMantovani had suggested in his recommendations. It pointed me to some interesting things, mostly that I shouldn’t be using UDFs on computed columns. I happened to have many UDFs backing computed columns, which I thought was fine. I guess I was thinking more in C# when it came to UDFs than in T-SQL. Turns out UDFs in computed columns force the query execution into serial mode even if I’m not touching the computed column. Supposedly SQL Server 2019 was supposed implement performance improvements for this, but I never saw it and it probably means UDFs have to be crafted or used in a very specific way.

So, I removed almost all of the UDFs and in-lined them into the computed column’s definition. There was three UDFs that did query into other tables, so it wasn’t as easy for them. I ended up adding the columns they were looking up into two tables the computed column were on and then in-lined those UDFs as well.

For example, my Addresses table had a computed column FullText that queried into Zones and Countries to get each of their abbreviations to compose the full address. The abbreviation columns are now duplicated onto the Addresses table. While I’m not happy to have duplications from a philosophical standpoint, this is the compromise that works so I’m good with it. The last UDF I merged into an update trigger I had to compute and store the column’s value.

Next I had to deal with lots of implicit conversions. Those were split into three different categories, I guess I would say:

Now that implicit conversions were no longer a thing, it helped, but it wasn’t enough. The query in the original post was still giving me the same trouble. I was baffled. I would do my test run in the app, hit the time out, but in SSMS it would continue to work perfectly fine.

After lots of digging, I somehow stumbled on to Slow in the Application, Fast in SSMS? Understanding Performance Mysteries by Erland Sommarskog. Reading through it, it became apparent that parameter sniffing was indeed the root problem. So, @alroc, you’re right that it was that. I was under the impression that it was only parameters that I explicitly pass, such as the SP’s parameters and I went to great lengths to change the local variables I had to in-line constants. I thought that would take care of it but it didn’t.

After reading Erland’s article, I understood that parameter sniffing also involves connection parameters, database settings, user settings, and even SSMS settings. Turned out that SSMS enables ARITHABORT and that was the parameter difference between it and the apps, which is why it was getting different execution plans that were magnitudes faster. After disabling it in SSMS and re-runing my tests, SSMS finally matched the app and was slow. Analyzing the execution plan I saw that it recommended an index on a different query than I thought was the problem.

I then spent a long time figuring out the right index, and while it helped on one part of the query, the new index did not make it faster. It turned out that there was a Sort operation that was taking the bulk of the query’s time and was going to tempdb 8 times. It was caused by a join between my Notifications and Reports tables, where the Report‘s ReceivedAtUtc column was used to sort the result. I tried adding an index for that, but it never helped. In the end I decided to add a NotifiedAtUtc column on Notifications and use that as the sorting column. After I did this change, the query finally worked perfectly and loaded in the app and SSMS in ~2 seconds. Memory consumption was also reduced finally. After I opened all 211 of the accounts in question, the memory use was only 2.1GB, vs the "as much memory as I can use and fail" before.

My final upgrade script also went from 4 hours to 2 hours to run from one of these changes, so that was a welcome bonus. The final rebuilt databases total 264GB, so I’m happy that I have accomplished my goals to both optimize and reduce the storage consumption and have actually good performance for once.

I’ve read more about SQL Server internals in the last few days than I ever thought I would or need.

I’m sorry but if you want to test a database performances or debug problems on AWS or Azure the only way is to have the same test environment on AWS or Azure.

Postgres: What could cause the error "cannot call populate_composite on a scalar"?