On SQL 2019 I try to change compability level to 2008 (to be sure that I will be able to attach on older version, at least I was in hope this will be possible). 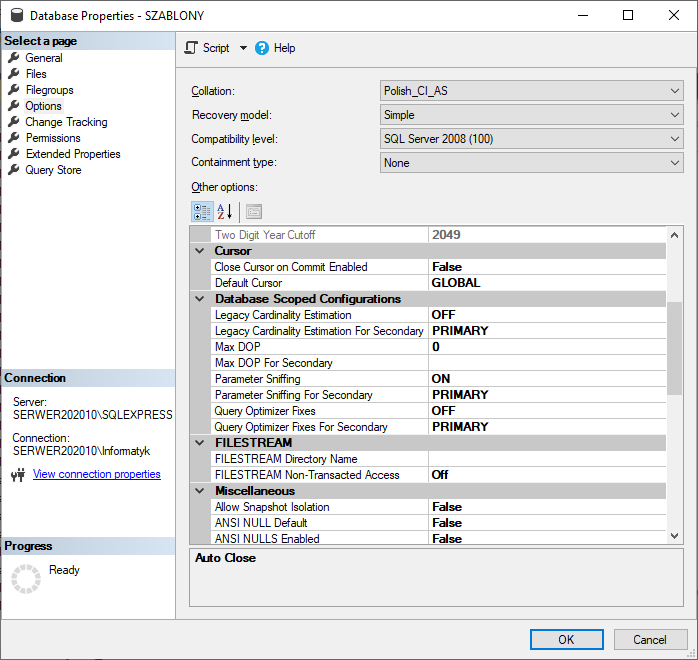 I detach this db.

When I try to attach on destination SQL I still get

As so far I found few related topics like this following:
Restore DB to older version

But there are talks about Restoring backup, but I ask about Detach/Attach and compability level.

So Here are my questions:

Question 1: Is there any way to attach newest mdb file on older SQL server ?

Question 2: What for is feature "Compatibility level" ?

After reading both following ansers I have:

Question 3: Do you think that with tools like dbeaver or devart it will be possible to export/import data between NEW<>OLD SQL versions , or would you propose other tools for this kind of job to do ?

You cannot restore or attach a database from a newer version of SQL to an older version. The only way to go backwards is to use a bacpac to export the schema and data and then import again.

This mainly controls whether certain features are enabled on the database (such as JSON), and it also controls which cardinality engine is used for estimating plans and their various costs.

Question 3 – How to go backwards

I haven’t used the tools you referenced so I don’t know about them. But I have used bacpac (included with SQL Server) to move databases around before. It works better with smaller databases.

You can also use SSIS to migrate the data although that may be a lot of work compared to just using a bacpac.

To get your database from a newer version to an older one you will need to script out the schema (tables, views, SPs etc) – remove any new features that are not supported by the older version & script out the data – BCP would help you here.

How do I get the execution plan for a view?

In SQLITE, how do you create a new table into its own file?