Given I am using the AdventureWorks2016 OLTP database

If can understand SQL Server’s estimation process for = and > predicates:

Then I can see the histogram for the column TransactionHistory.Quantity

The below screenshot is the top end of the histogram where I have run my tests: 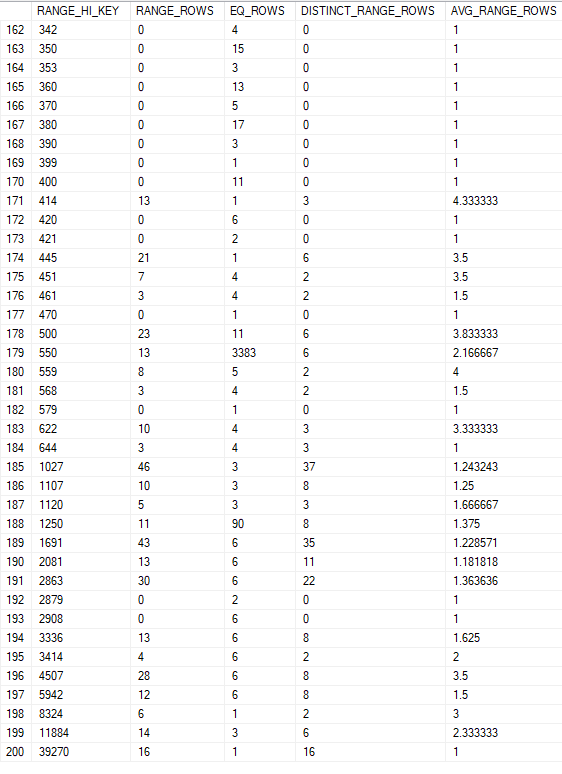 The following query will estimate 6 rows as the value in the predicate is a RANGE_HI_KEY so uses the EQ_ROWS for that bucket:

The following will estimate 1.36 rows as it is not a RANGE_HI_KEY so uses the AVG_RANGE_ROWS for the bucket it falls in:

A similar query below, but the value is not a RANGE_HI_KEY in the histogram. SQL Server again estimates 130 and appears to use the same method as above

for this query, SQL Server estimates 109,579 rows but I can’t work out where it has got that from:

for this query, SQL Server estimates 109,579 rows but I can’t work out where it has got that from:

The general idea, as shown in my related answer is to use linear interpolation within the partial step, assuming uniformity.

So the question is how many of those 23 RANGE_ROWS do we expect to match the predicate < 490 when they are assumed to be distributed uniformly within the histogram step with RANGE_HI_KEY 500:

The -1 factors account for using < which is assumed to exclude a DISTINCT_RANGE_ROW row. When <= is used, that row is assumed to match the predicate.

The whole thing is a modification of applying the fraction of the range you are asking for versus the range covered by the histogram step. Without excluding the unmatched value, it would be simply @PR/@SR.

How to monitor InnoDB Disk I/O Required for MySQL?