This reproduces for me on Microsoft SQL Server 2008 R2 (SP2) build 10.50.4000. It seems to have been fixed some time after SP3. The issue was reported on Connect (and subsequently migrated to user voice, so that link works).

You need more than 512KB of data in the LOB, and a variable assignment that reads from the same variable, without performing any calculations.

The statement very nearly executes without error. SQL Server performs all the calculations correctly and even assigns @v to @v without issue. The assertion occurs when SQL Server is closing down the statement, writing the final value of @v back out to the supplied variable reference @v. It does this as if @v were a parameter to the assignment statement. If that sounds complex, that’s because it is. Variable assignment is a bit of a hack, with some strange legacy behaviours. I don’t envy those that have to maintain that code with all its quirks.

The assertion does not happen with values 512KB or below because SQL Server uses an in-memory ILockBytes (ILB) class CInMemIlb to handle the operation. You may have noticed ILB in the assertion message (tmpilb.cpp). Over 512KB, SQL Server uses CMainIlb instead, which checks for other readers using the blob handle when writing. Assigning @v to itself without modification means this check fails.

Among the many possible workarounds, two that fall naturally out of the above observations are:

Examples are shown below. Neither produces the erroneous assertion:

Interestingly, the same assertion has resurfaced recently in a SQL Server 2019 fix for query store and polybase.

There’s really no database involved. You can see it hits no tables. But yes we’ve run this "in" several databases and run CHECKDB against them just to be sure.

The database involved is tempdb (database ID 2). That’s where the value of LOB variables gets written. You can see that by looking in the sys.dm_db_task_space_usage DMV (if your query weren’t failing with an error, that is): 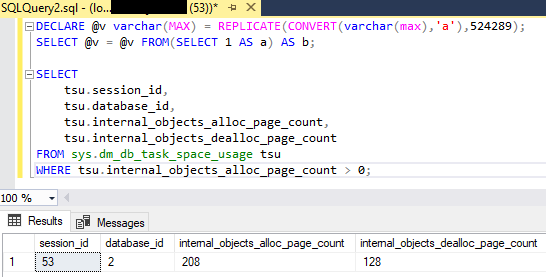 My data database context for that query was "master," but notice that the database_id in the query results in tempdb.

So you could check tempdb for corruption. This database gets recreated each time the server is restarted, so I’d be surprised if you have persistent corruption there. Unless you’re having disk issues, in which case you should consistently see errors in the Windows "System" Event log that indicate corruption.

All that said, it’s also very possible this is a bug in SQL Server 2008 R2 SP3. There is at least one non-security-related hotfix to that SP (KB3033860). The errors mentioned there don’t look like they match your situation, but could be related (they are assertion failures).

Unfortunately, since SQL Server 2008 R2 is out of support, this won’t be fixed even if it is a bug. Your best bet is to try and work around the problem, or upgrade.