I am a junior developer and I don’t know how to implement this next relationship.

Note: All entities described here are fictional but have equivalents in an actual production Database. Performance is irrelevant (OK with too many junctions tables) but would be nice to optimize the schema.

I have an entity named People, another named HomeAddress and finally one named Job.
They have a many-to-many relationship between each other such as People <-> Job and Job <-> HomeAddress. (Junction table have an underscore in their name).

This will need to also be replicated with other tables, including one for PhoneNumber. 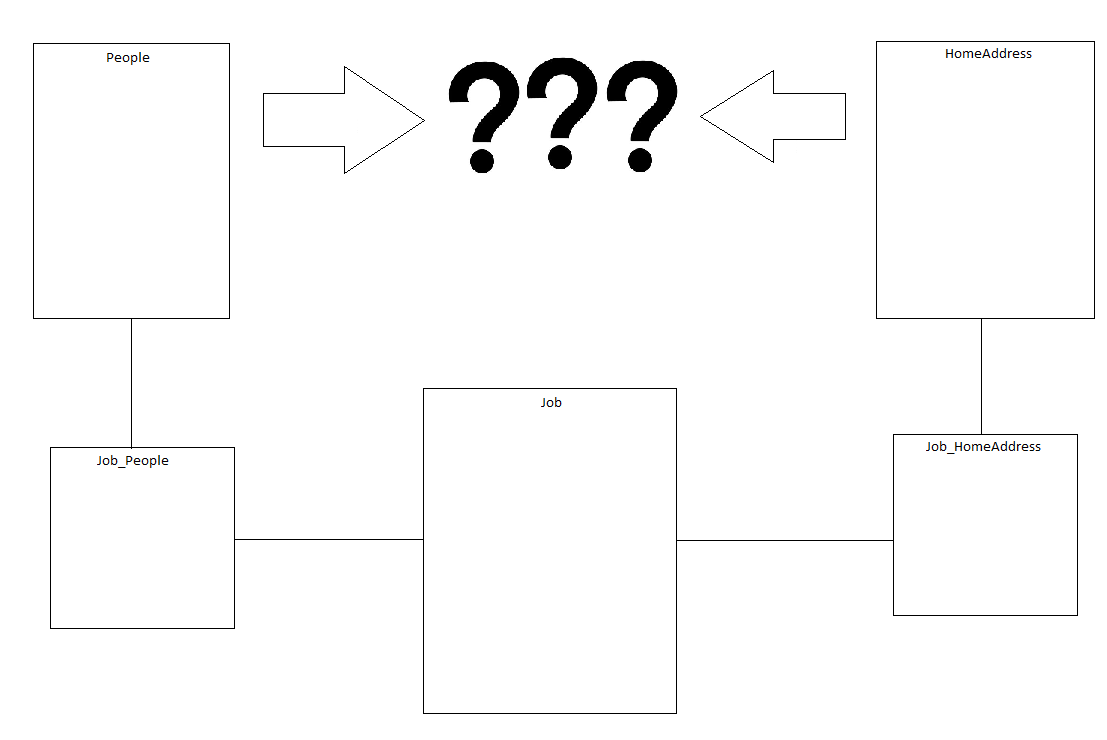 How do I link People and Address given this situation. The issue is some Jobs have an Address while others don’t. I need a relationship between People and Job and also specify an Address if available (all visual checks will be done on client side).

I don’t know how to store those informations given this schema since Address should be dependant on Job and if Job is removed from People, so should Address too.

Again, all entities names are irrelevant, but their relationship is what I am looking for.

Any help is appreciated.

Would this model work for you? 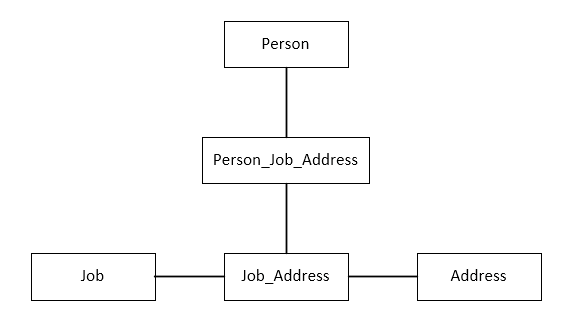 If I’m understanding correctly, people are not associated with jobs or addresses directly. Rather, people are associated with pre-established pairings of jobs and addresses. One twist is that the address is optional, but that’s OK; we can still model this in SQL Server with relational constraints (e.g. NOT NULL, FOREIGN KEY) to maintain integrity.

Think of the Job_Address table as your list of "actual jobs" – instances of some job happening at some address. Because of their many-to-many relationship, though, you need to factor out the jobs names and addresses to the Job and Address tables, respectively – which you did in your original model. I think the solution here is that people are associated with instances of the "actual jobs", not directly with the master lists of job names and addresses.

Here’s some T-SQL statements that build the tables from the preceding diagram, populate them with the three examples from your original post, and display the results.

Observe that in our Job_Address table, a job (JobID) is required (NOT NULL) but that an address (AddressID) is not (NULL).

The three "master lists" contain all of the jobs, addresses, and people you described in your three examples. The "associations" implement your examples.

Here are the query results:

In that case Job_HomeAddress becomes an entity in its own right (perhaps JobAtAddress) and you link People1 to that entity instead of Job.

Or you can say that it’s Job_People that is an entity, and have an optional relationship of that to Job_HomeAddress to restrict an individual’s Job to specific HomeAddresses. Which, if you think about it, is a more verbose way to implement the former approach.

1 – Bad naming choice; the other entity names are singular.

To directly answer your question: you don’t need to implement a relationship between People and HomeAdress. You already implemented that relationship via the Job table and the two joint tables.

Furthermore: you wrote in one of your comments "a data of HomeAddress inside People is dependent on Job having a HomeAddress"

You have to get rid of that "data of HomeAddress" inside the People table. Otherwise it will create problems down the road.

According to Microsoft: "Eliminate fields that do not depend on the key. Values in a record that are not part of that record’s key do not belong in the table."

Otherwise your choice of tables is perfectly good and sufficient. Just keep in mind normalization.

Also, you wrote "I don’t know how to store those information given this schema since Address should be dependent on Job and if Job is removed from People, so should Address too."

This type of logic is usually implemented via software as opposed to database design. So you shouldn’t worry about these when you design your database. These will be implemented in front-end code, triggers or stored procedures.

1)
I understood you want the PKs in both joint tables, to be the combination of the two PK’s of the entity tables the joint table references/links.
Meaning:

That is the safest way to go!

2)
You wrote "The issue is some Jobs have an Address while others don’t."
No problem with that. You have two options to chose from:

a) You will get NULLs in queries when there is no address, as in the sample query provided by @manniongeo, or

b) You can insert a row in HomeAddress with a text like "No address" as in the answer by @mustaccio, and you will get "No Address" instead of NULL.