I m using SQL server 2012 SP3 , I want to know if CLR is using Max server memory(bufferpool) or it is using memory out of max server memory because if I check Memoryclerk , seems SQLCLR have separate row as below. I saw one page mentioned from SQL Server 2012, CLR is included in max server memory. Please advice 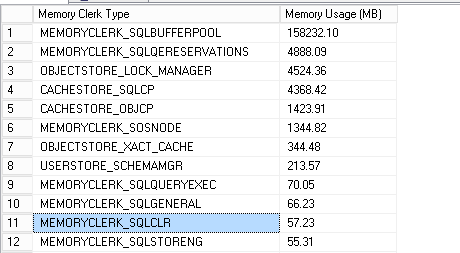 Single-Page Allocator (SPA), including only memory allocations that
were less than, or equal to 8-KB in the SQL Server process. The max
server memory (MB) and min server memory (MB) configuration options
determined the limits of physical memory that the SPA consumed. The
Buffer Pool was simultaneously the mechanism for SPA, and the largest
consumer of single-page allocations.

CLR Allocator,
including the SQL CLR heaps and its global allocations that are
created during CLR initialization. Memory allocations for thread
stacks in the SQL Server process.

I suggest reading this blog post by Jonathan Kehayias especially the comments.

Effects of min and max server memory on SQL CLR Q&A confirms the above assertion.

multiple count and use subsctract function in one query