For a long time I’ve had a Compaq nc8430 laptop. It’s nearly 3 years old now. Originally shipped with WinXP, but I installed Vista on it. From the very start it was not a good experience.

This thing has one of those “stickpoint” mice, which I like.

After a while, I noticed that the computer was generating lots and lots of heat. So much heat, that the stickpoint bumper would melt and disintegrate. Normally I would expect heat if the CPU was working hard, but even when the CPU was idle, the computer was hot. Much too hot to keep on my lap.

Turns out this is not an uncommon problem.

I installed the HWmonitor tool, and found that the CPU temp was 82C when it was plugged in – pretty darn hot. And because the temp was so high, the fan never turned off, so the laptop was as loud as a jet engine, always. If I unplugged it from A/C power, the screen would dim and the temperature would decrease, and the fan noise would lessen, but still, it was too loud.

What is the problem?

Turns out that with the ATI Video drivers for that laptop, for Vista, the GPU was always turned up high. Even if the CPU was doing nothing. And this generated lots of heat.

I guess this is to take advantage of the fancy graphics in Vista, but I wasn’t using the graphics. I just wanted a cool, quiet laptop.

I went into the ATI “Catalyst Control Center”: 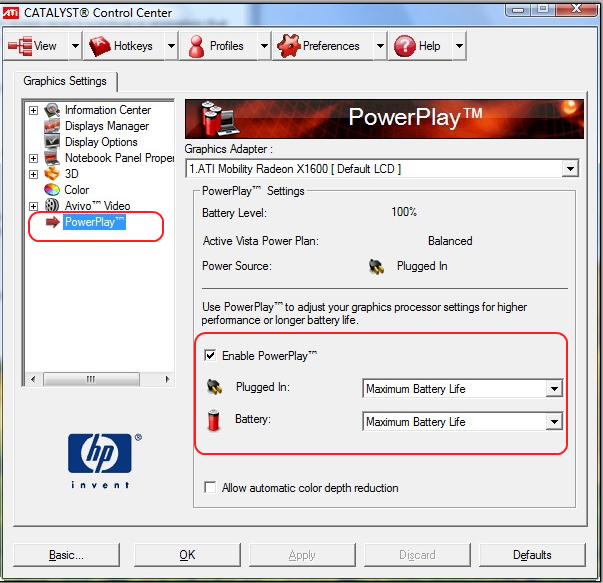 …and turned on the PowerPlay feature. This is a way you can turn down the GPU administratively.

By setting it to “max battery life” even when plugged in, the computer was no longer hot. The CPU temp is now 50C, and the fan is quieter.

It’s now no longer melting the stickpoint things, too.

EDIT: After I lived with it for a little, I decided that the fan was still too loud, still running too fast for the temperature. Someone suggested a BIOS update – I’ve got the latest BIOS. But while investigating, I learned about the ASL Compiler from Microsoft, which lets me set the fan speed for various temperature ranges. It also lets me set the temp ranges themselves. I followed Eddie’s advice, changing it for the nc8430.

Now I wouldn’t recommend this for everyone, but for superusers?

What I did was adjust the fan-speed % and the temperature brbeakpoints. Now the fan runs at 20% speed (v quiet) when the CPU temp is 50C.

I used a quick .NET Program to export the DSDT data. Find it here.

I also took one further step – and that was to reduce the CPU voltage via RMClock. I don’t know if this made a big difference or not. But I honestly don’t often do CPU intensive things on the laptop. I don’t need the CPU running at max speed.

With all these changes, it’s like a brand new laptop.

I hope this helps.

Maybe thermal paste between CPU and heat sink has dried out? If so, you will need to disasseble your notebook, carefully remove heatsink reaply new thermal paste, and assemble your computer. See my reply here

BTW: get service manual before disassembly – you can probably google it.

Some (or many, depending on who you ask) laptop brands have pretty faulty ACPI tables. Windows XP was very lenient with those kind of things and handled many things on its own even if they were not correctly specified. But Vista started to adhere to them more precisely which is nice if ACPI is correctly done in the hardware but downright sucks if it isn’t. Hardware vendors weren’t quite forced to look after these things because they somehow worked.

A BIOS upgrade might solve this, but in many cases there is no easy solution (short of reinstalling XP again) because the vendor already got all the money they are going to get from you so why should they care?

A friend of mine had an issue with his ThinkPad T40p where the fan would only kick in after the CPU reached around 95 °C which was not a nice temperature to keep the laptop on your lap.

I will also add that laptops are much more succeptible to “Dust Bunny Overheating”. It takes much less dust to cause a significant air flow restriction in a laptop compared to a desktop/tower.

Let me say that both powerplay settings and thermal paste replacement didn’t work for that damned (but good) notebook. I tried Notebook Hardware Control with a specific ACPI profile for the nc8430 but the software detects an ACPI error and the fan level can’t be modified for temperature levels. I am desperate, now i have the notebook onto a docking station and it seems to have a jet aeroplane near me that is ready to fly.

I read about the ASL Compiler from Microsoft but the link to Eddie’s Advice is for the hp 8510p and not for the nc8430…are you sure it will work out?

If i don’t solve the problem i think i am going to buy a new laptop.

Macro is not copying data validation in the cells

Update file names in single directory with prefix plus letter