As I know there is two choice for configuring a computer IP address in the network. Assigning a Static IP or obtaining a dynamic IP from a DHCP server.

But what is the Alternate Configuration in Windows (picture below). It just says this is when the computer is used on more than one network, but how does it assign IPs and when I should use this? 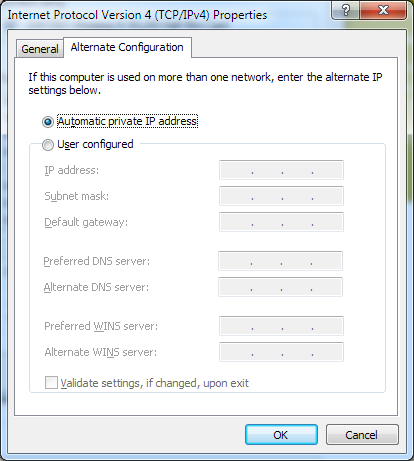 As @uSlackr has said, it is the configuration that Windows will use when DHCP is unavailable. What should probably be added is that, despite the MS article’s suggestion, this is almost never really used or needed for home users.

However, it is the reverse which I expect is more likely to be true. Most home networking hardware these days includes a DHCP server, and a majority of them even allow for DHCP address reservations. So, there’s rarely a time (unless you’re particularly paranoid) where a home network will ever actually need to use static IP addresses.

On the other hand there are some business networks which, for some reason or another, prefer static IP addressing over DHCP. So, you’ll probably end up actually using DHCP for your home network and the “Alternate Configuration” for work.

One other rare case where the “Alternate Configuration” can be handy is for direct PC-to-PC connections, or deliberately isolated, temporary networks where there is not going to be a DHCP server available either by design or just for simplicity. While you could just use APIPA, it is much easier to communicate using known, familiar IP addresses. If it is common for you to use your computer in such situations, having the “Alternate Configuration” as a fall-back definitely beats manually switching the settings on the “General” tab every time.

The only scenario I can think of which would be useful for home users is for exactly when, as @uSlackr put it, “DHCP fails”. It is not uncommon, with some SOHO networking equipment, for the DHCP service to occasionally malfunction and require a reboot of the device to resume operation. Generally during these times, a static IP configuration can work around the problem until you have a good opportunity to take the network down for the reboot.

When DHCP fails, Windows uses a self-assigned address to configure the network adapter. This is normally useless (although there could be times…). The idea of the Alternate config is to give Windows another set of setting to use in the case DHCP fails.

You can envision a number of scenarios when this might be helpful. Details from MS here

The answers from uSlackr and Iszi go to discuss Microsoft’s approach listed in their public-facing documentation.

In the industrial world, may you need to connect to devices directly that are on a private network; DHCP servers don’t always exist. Generally, when working within a specific product or OEM family, there is a IP standard to follow. For example: 192.168.0.x/255.255.255.0/no dns/no gateway.
Using the Alternate Configuration feature in the adapter’s TCP/IP settings allow you to jump to a specific IP address that can communicate with the devices on the private network, while also allowing your network adapter to pull the correct address from a DHCP server when on other private, industrial, and home networks that have DHCP servers.

I will choose an alternate IP address that can communicate with the private IPs. The subnet math is easy in these situations. I would choose an IP address of 192.168.0.254 with a subnetmask of 255.255.255.0, also without gateway or DNS.

Considering setting a network like this generally leads to other unintended effects, I’ll continue on:

Try out a subnet calulator from a site like this: http://www.subnet-calculator.com/subnet.php?net_class=C

After punching in your IP address and subnet mask, it will tell you the “Host Address Range” that your computer can talk to. For more complicated networks, this can be very important to help troubleshoot problems and determine an IP address you can select.

When operating in a multi-network adapter environment, be sure to be aware of the Network Connections->Advanced>Advanced Settings->Adapters and Bindings tab. It allows a user to prioritize how Windows uses network adapters to find a remote host.

If the wireless network adapter is a higher priority than you wired adapter that connects to the local equipment, Windows will try looking for 192.168.0.5 through the gateway on 10.0.0.1. Base on the subnet math of 10.0.0.1, 192.168.0.5 is not in the Host Address Range. Therefore, it will skip the local network and go directly to the gateway looking for it. Eventually it will give up and go to the next network adapter on the prioritization list.

What is the difference between bash and sh?

How do I get one of my Search Folders to display in Outlook Today?