I have an Apple (Ultra-thin USB) keyboard that I’m using on a Windows machine. The keyboard layout for an Apple keyboard is somewhat different from a standard Windows keyboard.

Being the very-smart, highly-intelligent person that I am (</sarcasm>) I tried to install the Windows Bootcamp drivers on the machine manually. What I mean by manually is, I opened the Bootcamp installer in 7-zip and found what looked like they keyboard drivers’ setup component. I extracted this piece and ran the .exe.

Because it was not installed in the conventional manner, I didn’t get any prompts and, at first, I didn’t notice it did anything, presumably because there were other components I didn’t install. Eventually I realized that my many of my Function keys (any with other controls on them, such as F1-F4 & F7-F12) didn’t seem to work. I later found out that they only work when pressing the “fn” button above the arrow keys on the keyboard.

This is not usable, so I’m trying to undo this.

I’ve tried manually uninstalling the Keyboard drivers from the Device Manager in Windows. The device manager shows two keyboard devices (no idea why), so I’ve de-installed both and re-installed them. This didn’t change anything at all.

Does anyone know what I’d need to do to reset the keyboard drivers to their Windows defaults? Everything worked fine before I started tinkering with the boot camp drivers.

Here is what my drivers’ properties dialog looks like. It claims the drivers are from Microsoft, however I’ve lost my ability to use my function keys, which worked before… 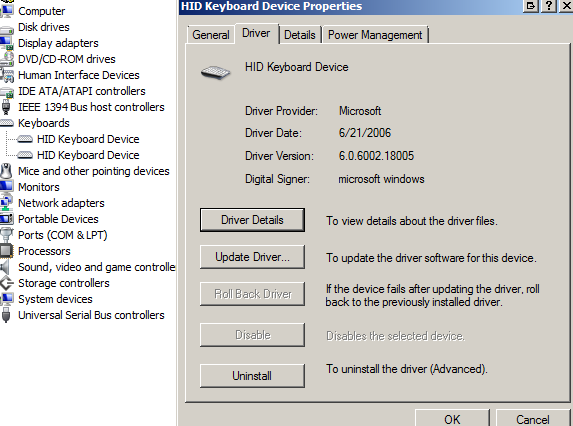 Try clicking the update drivers button and choose “Browse my computer for driver software”, then choose “Let me pick from a list…”.

This should display every driver windows considers compatible with your hardware, hopefully the list will include a few items one of which will be the original driver.
If what you are looking for does not appear there, you can uncheck the “show compatible hardware” box and look through the whole list, mainly under the “(standard keyboards)” category.

Set the device manager in connection mode (View->Devices by connections). Find your keyboard and look at the branches that it is connected to. Uninstall whatever devices are associated with it. There should be at least keyboard device, as well as an HID device, connected to the USB hub—uninstall the keyboard branch from as close to the hub as possible.

Next, you will need to find and remove the INF files associated with the problematic driver. Open \Windows\INF and sort by date. Open and examine the last few entires (the newest ones). When you find the one that contains the Bootcamp driver information for the keyboard, move that file somewhere (or delete it to the Recycle bin or whatever, just get it out of INF). Check a couple more files to make sure that there aren’t any other files associated with it.

Now delete all of the PNF files in there (they are cached files that will be regenerated the next time that Windows needs to install a driver).

Once you’ve gotten the INF files for the driver out, then either have device manager re-find the keyboard (Action->Scan for new devices), or just reboot (probably a better idea).

This time, when it looks for a keyboard driver, it will not find the Bootcamp one that is considered to be newer (and thus presumably better). Therefore it will search for the next best driver it can, building a new cache and driver database, and then install whatever you used before. 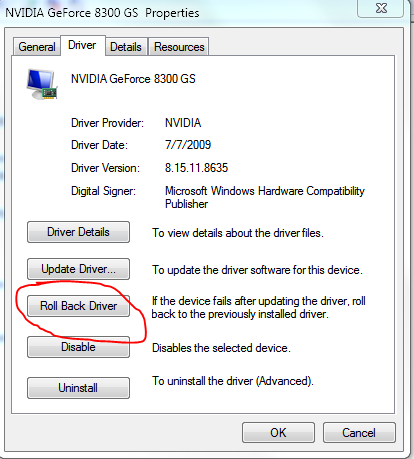 Maybe instead of diving into the internals of Windows you should try a utility such as Driver Magician.

The trial version might do enough to solve your problem.

It would be worth a try to install the drivers as they were meant to be, then uninstall them the right way.
At least, once their install correctly, there is probably an option in the program to use the F-Keys as normal, and using the “Fn” key as a modifier.

Why can't I access my web server from outside the network?

How to "alt-tab" out of full-screen Virt Manager?