But once in a while, when I switch to Windows, I feel better because I really like the font. It feels really much pleasant to watch windows font.

I installed windows fonts on my system and changed all the the default font settings to Tribuchet 10pt from Sans. It feels better, but still not as good. Oh, BTW, I love the default ubuntu console font. Monospace 10 really rocks. But Sans, oh please.

What is the default font on Windows. How do I enable it on Ubuntu. If it is paid, licensed, or illegal, I don’t care, I just want better fonts on my Ubuntu system.

And, also, on a Laptop with LCD screen, should Sub-Pixel Smoothing be enabled?

Update: I tried different fonts for a while on my system, and I think I could do a lot better. I am far from satisfied.

What is the best font I can have on my Ubuntu system. It is alright if it is commercial and expensive. I could do with better font typefaces.

I also like Windows fonts much better than the defaults on any Linux distributions. Well, at least the Windows XP default, Tahoma. (Also, I prefer no antialiasing at all for small font sizes, when using good TrueType fonts. Your mileage may vary!)

These days I find it very easy to get nice fonts in Ubuntu. (Gone are the days of needing to recompile Freetype with a certain option (I forget which) to get them right.)

Then configure Tahoma 8 as the default font in your desktop environment (KDE’s control centre for me; equally easy in the Gnome equivalent)

Another way is to simply install msttcorefonts package from Universe and run fc-cache, as instructed in this post on Ubuntu Blog.

The core fonts package doesn’t include Tahoma though. But if you have it from other sources, copying the .ttf files to ~/.fonts/ (or /usr/local/share/fonts for system wide availability) before running fc-cache should be sufficient.

I believe the default font is either:

You may also like Calibri. That’s a nice font too.

Since you mentioned you have a windows system, you should be able to grab these licensed fonts without any drama.

On an LCD you should definitely enable Sub pixel smoothing. It uses the sub pixels (the red green blue) to triple your horizontal resolution for fonts. In theory this adds some color fringing, but because the eye likes brightness more than color, you don’t see it.

Sorry, I can’t say much about the Windows fonts.

I use Bitstream Vera fonts on Firefox. It’s still not as good as it looks on Windows, but its a whole lot better than how it used to look.

This is what Wikipedia has to say:

Vera is a typeface (font) with a
liberal license. It was designed by
Jim Lyles from Bitstream, and is
closely based on Bitstream’s Prima,
for which Lyles was also responsible.
It is a TrueType font with full
hinting instructions, which improve
its rendering quality on
low-resolution devices such as
computer monitors.

Although Vera itself covers only
common punctuation and the Latin
alphabet with some diacritics, its
license allows others to make and
distribute derivative works with some
restrictions, and the DejaVu fonts
project is expanding it with
additional glyphs and styles. With
over 80% installation base, the DejaVu
fonts have been gaining on the role as
sans-serif default fonts in GNU/Linux.
On Windows and Macintosh systems,
DejaVu is however practically unknown,
whereas Bitstream Vera Sans has
installation bases of 25% and 20%
there, and 79% on Unix, according to a
survey.

Below is a screenshot of how Firefox looks with this font. Sub-pixel smoothing is also enabled. 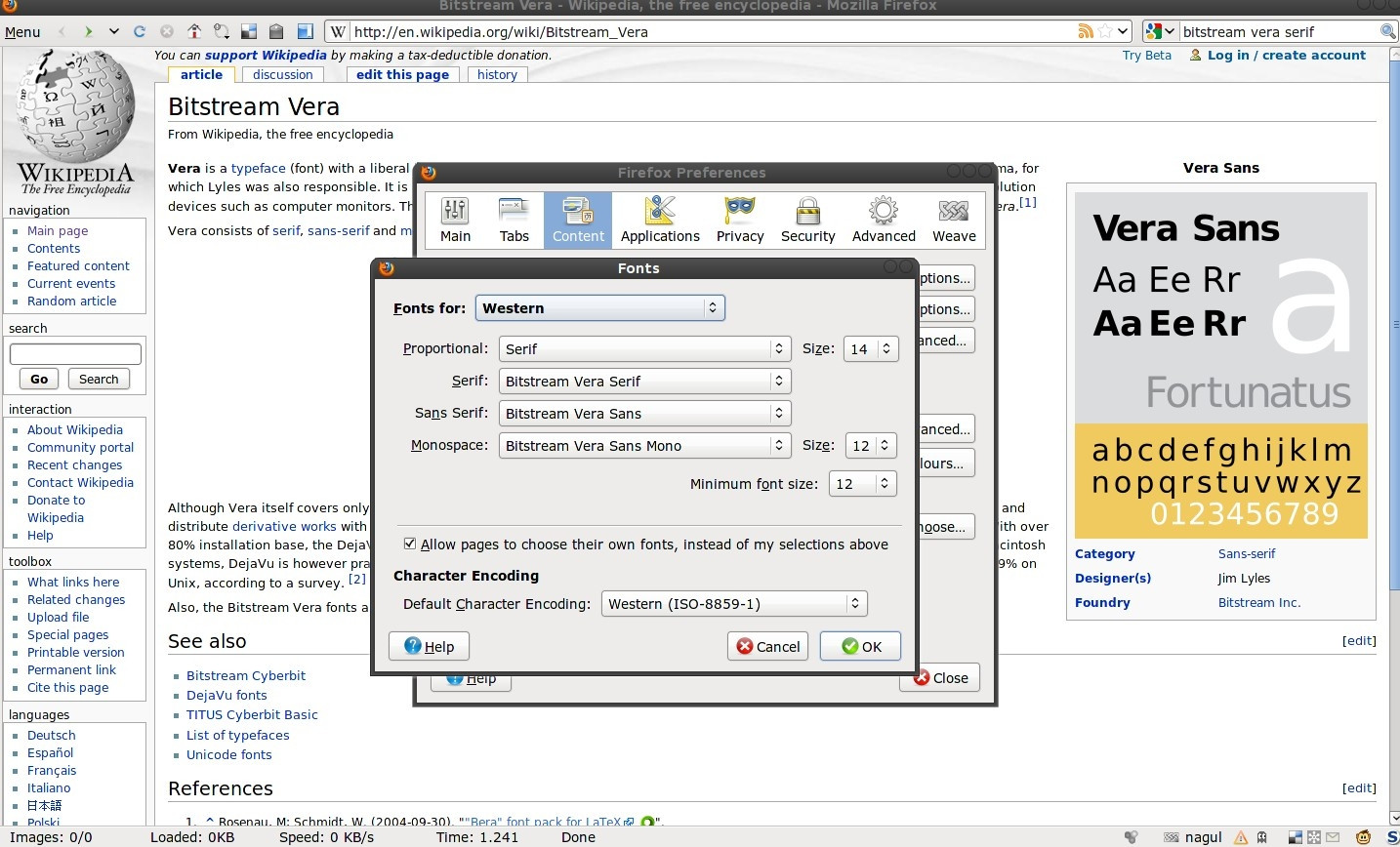 See also: Texts Rasterization Exposures by Maxim Shemanarev. I don’t know if any Linux distribution is doing what he suggests.

It is probably better to stay away from MS fonts in possible and find standard replacementent for each font. Although this requires manual work and some fonts (e.g. Corbel) do not have well defined replacements AFAIK.

How to make a Pie radar chart

How to colorize the Powershell prompt?

Is there a way to make Windows Terminal the default container for CMD and Powershell?