I’m building an AngularJS (1.2.16) web app with a RESTful API, and I’d like to send 401 Unauthorized responses for requests where authentication information is invalid or not present. When I do so, even with an HTTP interceptor present, I see the browser-presented basic “Authentication Required” dialog when an AJAX request is made via AngularJS. My interceptor runs after that dialog, which is too late to do something useful.

My backend API returns 401 for /api/things unless an authorization token is present. Nice and simple.

On the AngularJS app side, I’ve looked at the docs and set up an interceptor like this in the config block:

When I load my app, remove the authentication token, and perform an AJAX call to /api/things (to hopefully trigger the above interceptor), I see this: 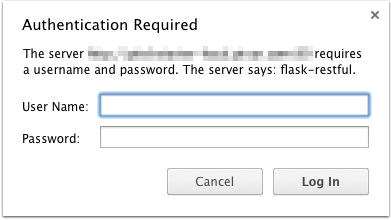 If I cancel that dialog, I see the console.log output of “Got a 401” that I was hoping to see instead of that dialog:

Clearly, the interceptor is working, but it’s intercepting too late!

I see numerous posts on the web regarding authentication with AngularJS in situations just like this, and they all seem to use HTTP interceptors, but none of them mention the basic auth dialog popping up. Some erroneous thoughts I had for its appearance included:

Am I missing some setup step or using the interceptor incorrectly?

The trick was to send a WWW-Authenticate response header of some value other than Basic. You can then capture the 401 with a basic $http interceptor, or something even more clever like angular-http-auth.

I had this issue together with Spring Boot Security (HTTP basic), and since Angular 1.3 you have to set $httpProvider.defaults.headers.common["X-Requested-With"] = 'XMLHttpRequest'; for the popup not to appear.

I’ve come up with this solution when trying to handle 401 errors.
I didn’t have the option to rewrite Basic to x-Basic or anything similar, so I’ve decided to handle it on client side with Angular.

When initiating a logout, first try making a bad request with a fake user to throw away the currently cached credentials.

I have this function doing the requests (it’s using jquery’s $.ajax with disabled asynch calls):

So when I try to log a user out, this happens:

Routing in angularjs for multiple controllers?